Our study on snake chromatophores in PNAS

Reptiles exhibit a spectacular diversity of skin colors and patterns brought about by the interactions among three chromatophore types: black melanophores with melanin-packed melanosomes, red and yellow xanthophores with pteridines- and/or carotenoids-containing vesicles, and iridophores filled with light-reflecting platelets generating structural colors. Whereas the melanosome, the only color-producing endosome in mammals, has been documented as a lysosome-related organelle, the maturation paths of xanthosomes and iridosomes are unknown.

The wild type corn snake (Pantherophis guttatus) is characterized by red dorsal and lateral blotches on an orange background (left panel in the figure below). We promote the corn snake as a model species to study the development of reptilian coloration because it is relatively easy to maintain and breed in captivity and numerous color and color pattern morphs exist and are associated to monolocus mutations with Mendelian inheritance. The so-called ‘Lavender’ morph of the corn snake is characterized by grey, rather than red, blotches on a pink, instead of orange, background (right panel in the figure below). 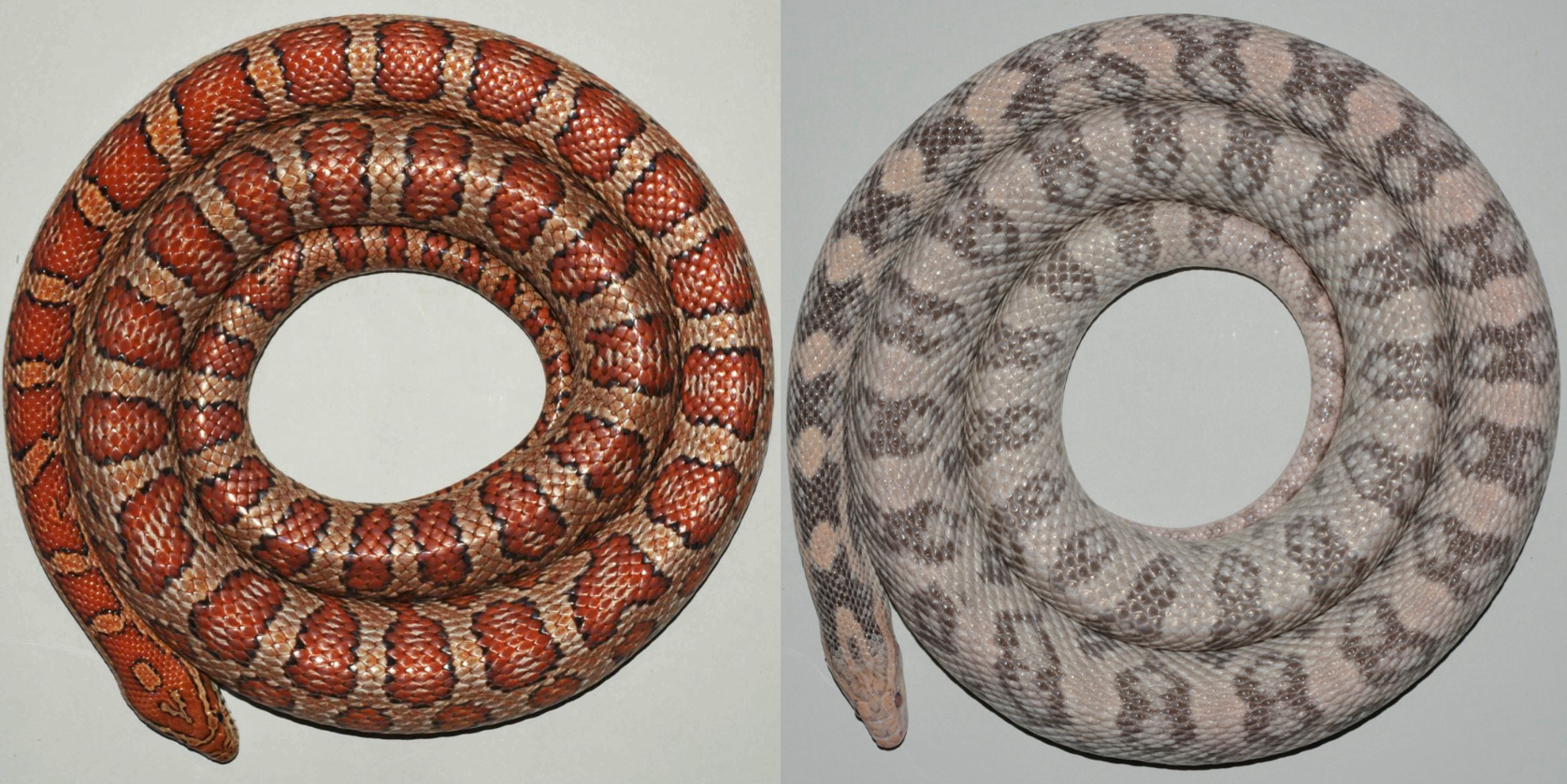 Sequencing the corn snake genome and mapping the Lavender mutation

Here, we first use 10x Genomics linked-reads and optical mapping to assemble and annotate a nearly chromosome-quality genome of the corn snake. The assembly is 1.71 Gb long, with an N50 of 16.8 Mb and L50 of 24. The genome assembly and its annotation is publicly available via our genome browser as well as through the NCBI database (UNIGE_PanGut_3.0). The high contiguity of the corn snake genome greatly facilitated mapping-by-sequencing analyses: we identify the 3.9 Mb interval where the lavender variant resides. Genomic and transcriptomic sequencing analyses reveal a single nucleotide polymorphism introducing a premature stop codon in the coding sequence of one of the main candidate genes in the interval: the ‘lysosomal trafficking regulator’ (LYST). Remarkably, mutations in the gene LYST modify the fur color of minks (gun-metal gray instead of brown) and mice (beige instead of black). Mammals however, have only melanin as a pigment and lack xanthophores and iridophores. The question was then to understand which of the cells contributing to skin colour are affected by the LYST mutation in Lavender corn snakes.

Some mutations affecting LYST in humans cause the Chédiak-Higashi syndrome, characterised by albinism, deficiency of the immune system and accumulation of enlarged lysosomes (the “garbage disposals” that digest the non-functional molecules in cells). These results prompted Athanasia Tzika to investigate hepatocytes, the main cell type forming the liver in vertebrates, known to contain many lysosomes. Remarkably, hepatocytes in normal corn snakes exhibit a great number of small (normal) lysosomes whereas Lavender hepatocytes contain much larger lysosomes that form aggregates. In order to understand how the gene LYST is involved in the development of the corn snake skin coloration, the Swiss team then collected skin biopsies in normal and Lavender individuals and used light microscopy and electron microscopy to identify chromatophores (black melanophores, red xanthophores, and reflective iridophores), their spatial organization in the skin and the morphology of their sub-cellular vesicles. The researchers identified that Lavender snakes exhibit melanophores with immature melanin-producing sub-cellular compartments of abnormal shapes as well as a much reduced number of xanthophores that fail to accumulate red pigments. Strikingly, Lavender corn snakes also exhibit abnormal iridophores with nano-crystals that are highly deformed and grouped within larger compartments.

This work shows that ‘non-classical model species’ can inform us on yet unknown biological processes that generate the complexity and diversity of colors and patterns in vertebrates. In other words, studying squamate reptiles (snakes and lizards, consisting of twice as many species as mammals) can improve our understanding of the developmental mechanisms underlying the evolution of organismal forms. Here, the abnormal xanthophores and iridophores observed in Lavender corn snake readily indicate that red-pigment vesicles and guanine-crystal compartments are also LROs, rather than two systems invented ‘from scratch’ during evolution. These results open a new research field to understand how melanin-producing nano-factories have been transformed during evolution into red/yellow pigment storing devices and guanine-crystalisation nano-machines.

Read the article in PNAS